When it comes to desserts, it is indeed almond bark vs. white chocolate. Between the two choices, which one satisfies sweet cravings more? Most of the time, people develop a sweet tooth after eating an excellent meal. That is why it would help know whether almond bark or white chocolate is appropriate for dessert.

Typically, white chocolate is a bit hard to work with when baking. With that, it would be best to compare how both melts. With regards to almond bark, you do not need to worry. The main reason is that you can melt it effortlessly.

On the other hand, white chocolate melts at a somewhat low temperature. However, it would help if you constantly stirred it once it began melting. As a consequence of not doing so, the melted white chocolate could scorch. In addition to that, it might bubble up or, worse, explode.

Moreover, the almond bark flavor is delectable. Not only that but also using it will result in an appealing dessert. In comparison, white chocolate is luxurious. In addition to that, it has a milky and rich flavor. That is why high-class restaurants use them regularly. As a result, white chocolate has a notable superiority over almond barks. Plus, it satisfies sweet cravings more than almond bark.

What Is Almond Bark?

In most cases, people mistake almond bark with chocolate. Though it does appear like chocolate, it is essentially a chocolate-like confection. Moreover, ingredients in almond bark include cocoa butter, sugar, flavors, and vegetable fats. Also, people often refer to almond bark as a candy that has semisweet milk. Likewise, it is milk chocolate with almond pieces. Besides that, it could have various nuts and fruits in it.

Usually, almond barks are dips for fruits like strawberries and nuts. Also, bear in mind that it is unlike white chocolate with regards to its flavor. Plus, it lacks a milky and thick texture when compared to a bar of chocolate. Nonetheless, it has a sweet nectar-like taste. Because of that, it is comparable with milk chocolate varieties.

Moreover, you may be wondering, “why is it called almond bark?” Bear in mind that making almond bark does not need almonds. For that reason, it gets its name from its primary usage, which is to cover almonds. Besides, individuals usually cover fruits and nuts with almond bark. The main reason is that it is convenient to melt. 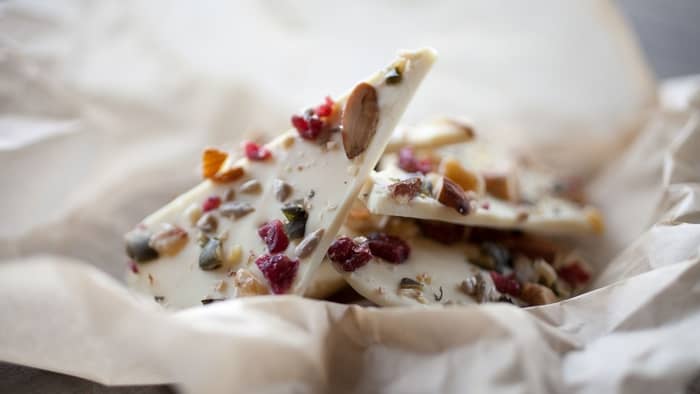 Before anything else, you should know that almond bark is available in chocolate and vanilla flavors. In addition to that, you can buy it in disks, melting chocolates, and blocks.

Moreover, almond bark is excellent for coating and melting desserts like Ritz crackers filled with peanut butter and Oreo cookies. Also, what makes almond bark remarkably suitable for melting is that you do not need to temper it.

Furthermore, it is relatively simple to melt almond bark at different temperatures and in many ways. Bear in mind that tempering is a process of heating chocolate so that the cocoa butter emulsifies. Also, it does so with the rest of the chocolate. Because of that, they will produce white streaks on the surface if they undergo blooming. Remember, all you need to do is re-temper it; it is unnecessary to throw it away.

Learn more about What Can I Make With Flour, Water, and Sugar? Savory and Sweet!

What Is White Chocolate?

To make white chocolate, you need sugar, milk solids, cocoa butter, and vanilla. Also, you may need lecithin, which is a fatty substance. That is why it possesses a white ivory appearance.

Keep in mind that white chocolate is not like regular chocolate. Besides that, it does not taste the same. The reason being is that it does not have chocolate solids. Remember, there is a need to remove the cocoa beans from the pods. After that, manufacturers ferment, dry, roast, crack it open and throw the shells to get the nib. 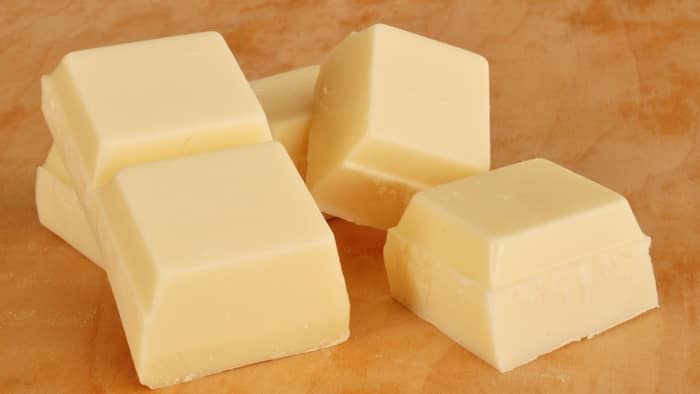 Considering that white chocolate is creamy and sweet, it will indeed create amazing desserts. And most importantly, it contains a distinct taste since it does not include cocoa solids.

For instance, if you love fudge, you should try making white chocolate coconut fudge. In addition to that, you can create brownies with white chocolate. Talk about excellent texture, fudgy, buttery, and thick, all in one yummy dessert. Also, white chocolate brownies are undoubtedly a good choice if you do not prefer overly sweet cakes.

Also, you can indeed make a no-bake white chocolate s’mores bar. It is a famous American dessert. Keep in mind that it is easy to create. The reason being is that you no longer need to utilize a conventional oven. Likewise, you do not need to wait for a long time for it to cool down. So you can serve it to your loved ones as soon as possible. Overall, white chocolate s’mores are exceptionally sweet, and they have an excellent texture.

For the most part, almond barks are an excellent option for creating sweet delicacies. In addition to that, it is convenient to utilize. Not only that, but also you do not need to do any complicated procedures. Nevertheless, nothing can beat the white chocolate’s flavor and consistency when used in baking.